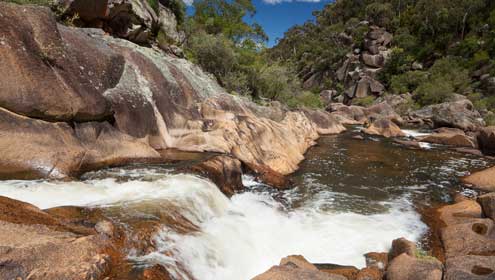 Here, the Sydney Basin sedimentary rocks are represented only by a few thin remnants of Permian strata on plateau tops, as in the Wild Dog Mountains, at Kanangra Walls and on the Bindook Highlands.

These caps are made of sandstone and conglomerate of the Snapper Point Formation (formerly called Megalong Conglomerate). 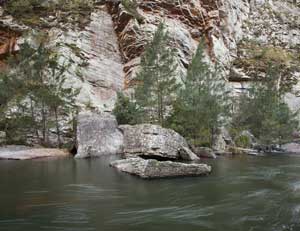 Quartzite (metamorphosed sandstone) is prominent in the complex ridge-and-gorge terrain because of its resistance to erosion.

The Lachlan Fold Belt includes some areas of limestone, most famously at Jenolan Caves, but also at Colong, Tuglow and Wombeyan caves.

A large granite batholith sprawls across part of the Boyd Plateau and upper gorge of the Kowmung River, creating a distinctive landform with tors on the plateau and slabs in the gorge. 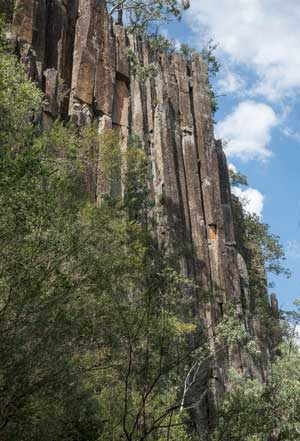 Barrallier Ignimbrite  (Ian Brown)
This extensive rock type occupies much of the Bindook Highlands where it is exposed in columnar cliffs. It was deposited as multiple ash flows during a major episode of Devonian vulcanism.
Another special geological feature of the southern Blue Mountains resulted from extended volcanic activity in the Devonian.

The Bindook Volcanic Complex is a huge sequence of volcanic sedimentary rocks that makes up much of the Bindook Highlands and extends well to the south.

Multiple pyroclastic ash flows piled up to a depth of 500 metres, with a total volume of at least 1000 cubic kilometres!

This Barrallier Ignimbrite features columnar outcrops, as in Bindook Gorge.

The Yerranderie volcano, with its neck below Yerranderie Peak, was part of the last phase of Devonian vulcanism. 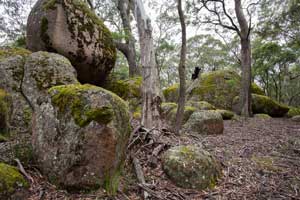 The Boyd Plateau is a unique landscape within the Greater Blue Mountains World Heritage Area. Granitic rocks, featuring large tors, make up a large part of the plateau. 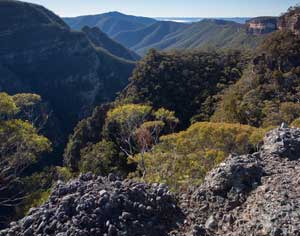 The vertical cliffs of Kanangra Walls are made of horizontal layers of Permian conglomerates and sandstones (foreground and right background) of the Snapper Point Formation.

These rocks were deposited directly on a surface eroded from tilted beds of the Lachlan Fold Belt (left background). 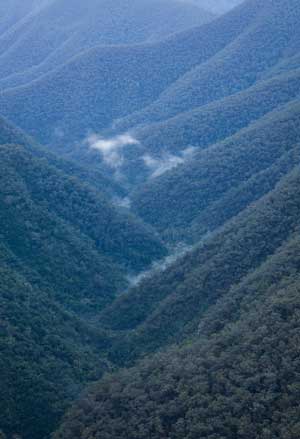 Much of the southern Blue Mountains is characterised by steep, plunging spurs of Lachlan Fold Belt metasediments.