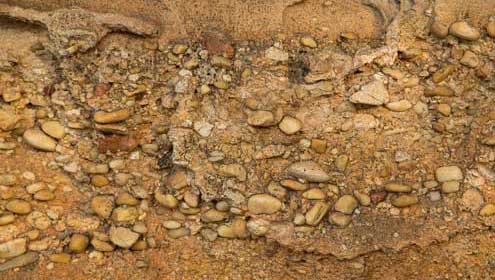 About 300 million years ago the local landscape was made up of even older, mixed rocks that had been changed by heat and pressure, buckled and folded: the Lachlan Fold Belt.

Crustal rifting caused the area to sink until at times it was flooded by the sea. A long period of deposition into this depression followed. Rivers washed in sediments eroded from distant inland mountains and dying swamp vegetation piled up to form coal. 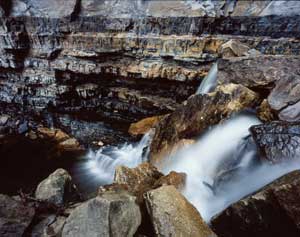 Permian coal seams  (Ian Brown)
Permian-age beds of coal and oil shale occur across the entire Sydney Basin and are economically and environmentally important.
These rocks are formed from the burial and compression of masses of vegetation – a process which stores both carbon and solar energy.
During the Permian mostly sandy and muddy sediments were deposited, followed by a massive thickness of sands, clays and pebbles into the Triassic. Then finer sediments were piled on the top of the sequence.

Deposition may also have occurred in the Jurassic and Cretaceous but if so, these later layers have been stripped away by erosion.

As the sediments were progressively buried beneath higher layers, they were compacted and changed into solid stone. The huge sedimentary structure is known as the Sydney Basin, and covers 64,000 square kilometres (some of it offshore).

Then about 20 to 14 million years ago basalt lavas flooded across the landscape from multiple but unknown volcanoes.

Lifting and carving the mountains

The great pile of Sydney Basin debris - up to six kilometres thick - represents some 65 million years of accumulation.

The next step in making the mountains was when earth movements pushed up the Sydney Basin rocks, the Central Tablelands and more. These uneven uplifts raised a broad tableland that sloped gently from the highlands towards the coast with, in places, a sharper escarpment on the eastern edge.

The phases of uplift also left some impressive evidence, including the Lapstone Structural Complex along the eastern edge of the central Blue Mountains, which takes in steeply-dipping beds on the eastern escarpment (the Lapstone Monocline) and the Kurrajong Fault. 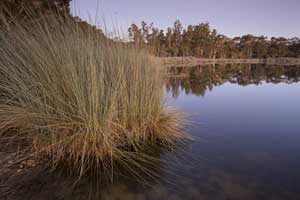 Glenbrook Lagoon  (Ian Brown)
The uplifted buckling of the eastern edge of the Blue Mountains formed a number of wetlands.
Glenbrook Lagoon was dammed when the lower part of Lapstone Creek was raised along a fault in the Lapstone Structural Complex.
Some drainages were blocked or reversed by uplift, tilting and faulting, creating Thirlmere Lakes, Glenbrook Lagoon, Burralow Swamp, Mountain Lagoon and the Long Weeny Creek swamps.

Erosion accompanied the uplifts and is an ongoing process of stripping off the upper rock layers and carving all the valleys, canyons and gorges.

Not long after Europeans first 'crossed the Blue Mountains', Charles Darwin stood at Govetts Leap. He thought the puny stream below could not account for the prodigious valley, and surmised that the sea must have inundated the land and formed the gorges by coastal erosion. But he was wrong. All that was required for that stream to cut the Grose Valley was enough time, and enough floods. 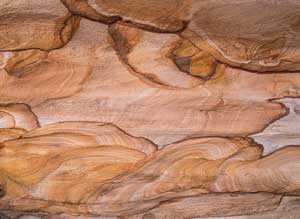 This raw sandstone, exposed by natural weathering, shows circular bands of red and orange iron oxide minerals – a result of water first leaching and then redepositing the minerals within the rock. The concentric patterns are known as Liesegang rings.