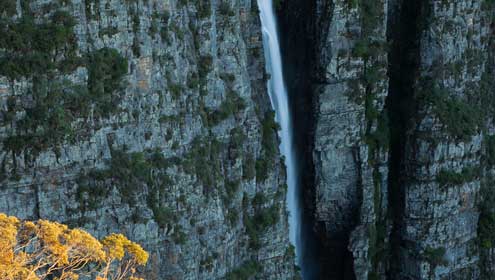 Kanangra Falls   (Ian Brown)
Waterfalls are a common feature of the Blue Mountains and other parts of the Great Escarpment, as east-flowing streams descend steeply to the coast.
BM Landscape Menu
⇒  introduction
⇒  landform
⇒  geology
landscape today
⇒  sandstone country
⇒  volcanic interruptions
⇒  Southern Blue Mountains
Anyone who takes in the view from a cliff-top lookout or from the air can see that these are not mountains, but "Blue Valleys" - a vast plateau of remarkably even height, sloping eastwards and carved by deep valleys and gorges.

Some early European explorers were bamboozled by this topsy-turvy arrangement. Raised in another world of gentle valleys, they tried to follow the rivers inland, only to get tangled in the gorges.

Europeans finally succeeded by following the much easier ridgelines that had been used as Aboriginal pathways for millennia. These major ridgelines are key to understanding the geography of the Blue Mountains.

The Great Dividing Range lies to the west, running parallel to the coast. The name exaggerates, as this is mostly a gentle and winding watershed, which subtly divides the coastal and inland catchments. It is spectacular only to the east, where the coastal rivers are carving back into the rolling, kilometre-high uplands of the Central Tableland to create an escarpment riven by steeply-descending tributary streams.

This Blue Mountains rampart is part of a much more extensive feature: the Great Escarpment, which runs the full length of Australia's eastern seaboard. Approaching the Blue Mountains from Sydney, the frontal edge of the sloping plateau is the obvious feature, as it drops abruptly to near sea level on the Nepean River. 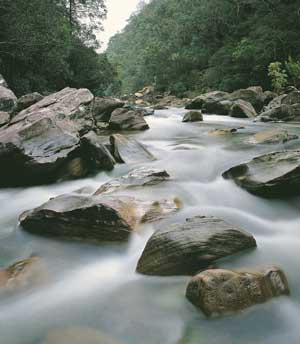 Grose River  (photo by: Ian Brown)
The coastal rivers continue to cut deeply into the uplifted Blue Mountains plateau.
Between the rivers, a number of subsidiary ridges branch off the Great Divide and reach towards the coast, like the teeth of a comb. The Blue Mountains Range is one of them, leaving the divide west of Lithgow, separating the Coxs River from the Grose River and carrying the main transport and township corridor.

Most of the Greater Blue Mountains is a crumpled maze of snaking ridges and gorges. The only parts with relatively gentle topography are eastward extensions and outliers of the Central Tableland. These include the Bindook Highlands, Boyd Plateau, Newnes Plateau and Nullo Mountain.

The 'mountains' reach their peak at 1362 metres elevation, on Mount Bindo near Hampton, on the crest of the Great Dividing Range. But the top of the World Heritage Area is a small bump on the Boyd Plateau, at 1334 metres. This is also where the local relief is greatest – from just off the eastern edge of Boyd Plateau, Mount Guouogang (1291m) falls nearly 1200 metres to the Coxs River. The highest point in the central Blue Mountains is an unmapped obscurity on Newnes Plateau, about 1189 metres high. 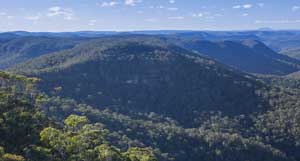 Almost-horizontal beds of sandstone were uplifted to create an even-topped plateau, deeply dissected by numerous gorges.

Only the occasional basalt cap stands above the plateau level, like the distant landmark of Mount Yengo. 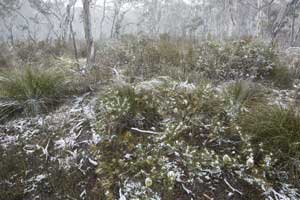 The Newnes Plateau, on the western edge of the Blue Mountains Range, is the highest sandstone in the Greater Blue Mountains, with a large area above 1100 metres.