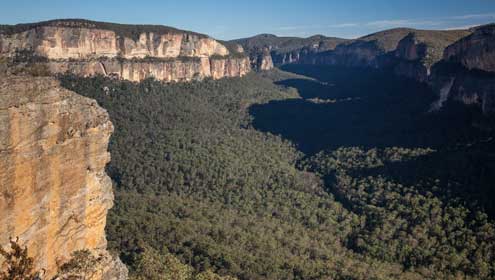 The sandstone country is made up of almost horizontal strata, but the gentle eastward dip and the different layers down the sequence are critical in shaping the landscape. 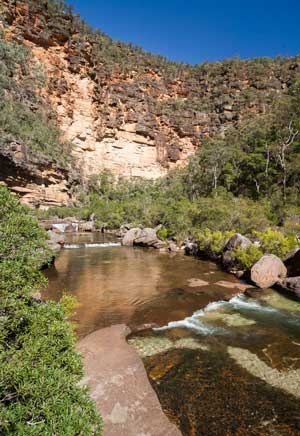 Wollangambe Gorge  (Ian Brown)
The inner cliffs of all the all the main gorges in the eastern (lower) Blue Mountains are made of Narrabeen Group sandstone, capped by younger Hawkesbury Sandstone on the plateau.
In the lower mountains and around Sydney and Yengo National Park, Hawkesbury Sandstone forms the plateau surface. Beneath, the lower cliffs of deep gorges like the Colo River and Erskine Creek are made of Narrabeen Group sandstone. The Permian strata, lower still, remain buried.

Higher up the mountains and in the Nattai-Burragorang country, the Hawkesbury Sandstone has been eroded away, leaving Narrabeen Group rocks to dominate and make up the plateau and its familiar long clifflines.

The deeper valleys have cut down enough to reach the Permian rocks, creating the sloping valley sides under massive vertical cliffs - the well-known profile of the Widden, Capertee, Wolgan, Grose, Jamison, Burragorang and Nattai valleys.

The great pile of Sydney Basin debris - up to six kilometres thick - represents some 65 million years of accumulation.

The next step in making the mountains was when earth movements pushed up the Sydney Basin rocks, the Central Tablelands and more. These uneven uplifts raised a broad tableland that sloped gently from the highlands towards the coast with, in places, a sharper escarpment on the eastern edge.

The phases of uplift also left some impressive evidence, including the Lapstone Structural Complex along the eastern edge of the central Blue Mountains, which takes in steeply-dipping beds on the eastern escarpment (the Lapstone Monocline) and the Kurrajong Fault. 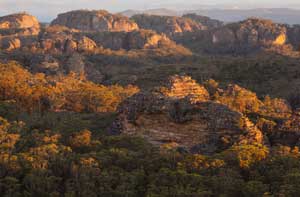 Gardens of Stone  (Ian Brown)
On the western edge of the Blue Mountains sandstone is a distinctive landscape characterised by 'pagoda' rock pinnacles and domes.
The Gardens of Stone area is partly protected in the national park of the same name and Wollemi National Park, but much of the best is still unprotected and threatened in State Forests.
Significant layers in the Permian sequence include chert (an important rock for Aboriginal tool-making) and carbonaceous deposits of coal and oil shale (raw material for major industries, both historical and current).

In just a few very deep sandstone valleys, the ancient 'basement' of the Lachlan Fold Belt is exposed. These rocks can be seen in small areas of the western Capertee, Wolgan and Jamison/Kedumba valleys, and also make up the Central Tableland and beyond.

Wherever it is found, sandstone produces magnificent features. In the Blue Mountains, the dramatic clifflines, weathered caves, gorges, slot canyons, pinnacles and 'pagoda' rocks are all the result of weathering and erosion of different layers of sandstone.

The Gardens of Stone pagoda region of the western Blue Mountains is especially noteworthy, with its 'cities' of rock towers and intricate ironstone sculptures. 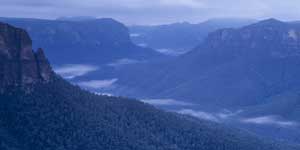 Charles Darwin wondered if the sea had gouged out the Grose Valley, but it was just the Grose River working away over millennia. 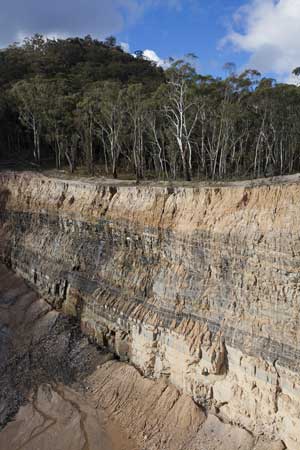 The Permian beds at the base of the Sydney Basin, exposed here by an open-cut coal mine, comprise layers of chert, claystone, shale, coal and volcanics.