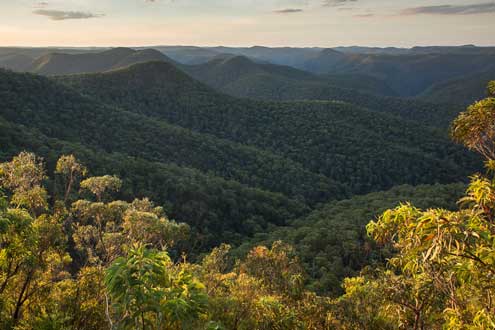 From any high point or lookout, you’ll see a vast carpet of dun green rolling over the terrain and stretching into the distance, made up of the interlocking crowns of eucalypts.

Jamison Valley from Olympian Rock Lookout
click the image to access a scrollable panorama
(panorama courtesy of Panedia)
Some 85% of the park system is covered in ‘dry sclerophyll forest’, made up mainly of many different eucalypt tree species with a variously scrubby or grassy understorey.

It is the other 15% of different types of vegetation that provides the visual and ecological counterpoint and adds such great diversity.

(Much of the material for this section of the website is derived from Vegetation, Fire and Climate Change in the Greater Blue Mountains World Heritage Area by Kate Hammill & Liz Tasker (DECCW, 2010), an authoritative and detailed treatise on the subject and essential reading for anyone who wants more.) 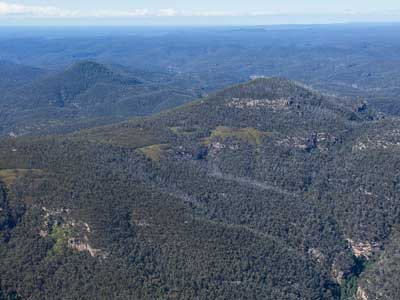 Vegetation patterns, Wollemi National Park
The less common vegetation formations occur in distinct environments within the matrix of dry sclerophyll forest.   (Ian Brown)
Vegetation mapping of the GBMWHA has identified some 500 different vegetation communities in the area, within 28 vegetation classes.

These classes fall within seven vegetation formations. The formations and their approximate part of the GBMWHA is:

(For a description of these terms and how ecologists use them to classify vegetation, see below. The classifications used for the GBMWHA are derived from the state-wide classification system in Ocean shores to desert dunes – the native vegetation of New South Wales and the ACT, Keith 2004. It should also be noted that nature is a continuum, and vegetation classification is an imperfect method for forcing nature into convenient boxes that help us to understand what’s going on).

This ecological diversity arises from the diverse landscape and climate of the GBMWHA.

The more than 2,000 plant species that make up vegetation communities find suitable habitat according to the localised geology, soils, topography, climates and fire patterns across the region, as well as interactions with fauna and other plants.

Observing and trying to understand these variations are some of the great joys of exploring this landscape.

The vegetation in brief

As Kate Hamill and Liz Tasker have summarised :

Adjoining these gullies in areas that burn from time to time are tall wet sclerophyll forests. These forests are also found on the few volcanic areas of the region – the basalt-caps of mountains such as Tomah, Wilson and Irvine, as well as on the cool, moist higher plateaux, as in Kanangra-Boyd, where infrequent fires provide the conditions suited to these forests.

The majority of the Greater Blue Mountains support dry sclerophyll forests. Their muted, grey-green canopy is made up of a variety of eucalypts, and they grow throughout the extensive sandstone country stretching from the Wollemi to the Wollondilly River with relatively low nutrient soils. These forests are remarkable for their diverse understorey of banksias, wattles, peas, and other sclerophyllous shrubs; in spring they are a riot of yellow, pink, red and purple flowers. On slightly more fertile soils, abundant grasses too are found among the understorey.

In areas with soils too shallow or nutrient-poor to support trees, the shrubby heathlands are hardy enough to grow; and in frequently waterlogged areas upland freshwater swamps flourish. In spring the heathlands flower profusely providing important seasonal food resources for many birds and small mammals, while the swamps play a vital role in storing water during wet times, filtering it and gradually releasing it throughout the year.”

The full document “Vegetation, Fire and Climate Change in the Greater Blue Mountains World Heritage Area” by Hamill and Tasker can be found here.

TECs are those communities listed as either vulnerable, endangered or critically endangered under the NSW Biodiversity Conservation Act 2016.

TECs which occur within each vegetation formation within the Greater Blue Mountains are listed on the web page for each formation.

A full list of communities listed under the NSW Biodiversity Conservation Act can be found here.

Plant communities are the most detailed and homogeneous units in the vegetation hierarchy. They are locally consistent assemblages of plant species that live together, generally at the same time. Countless plant communities occur across NSW, and are defined in many regional and local mapping studies. There are some 500 plant communities described to date in the Greater Blue Mountains World Heritage Area, a testament to the incredible diversity of vegetation.

Vegetation classes are groupings of related plant communities, defined mainly by overall floristic similarities (i.e. shared plant species), although they may also share structural and habitat characteristics. There are 99 vegetation classes recognised in NSW; some 28 of these can be found in the Greater Blue Mountains World Heritage Area. Each is assigned to a particular vegetation formation according to its most common structural form.