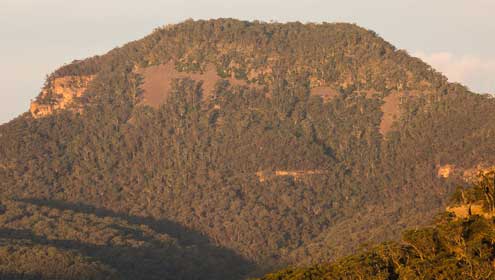 Diatremes are often made up of breccia, a jumbled mess of basalt and sandstone resulting from sudden explosive force, and tend to weather into roughly circular basins surrounded by sandstone bluffs. 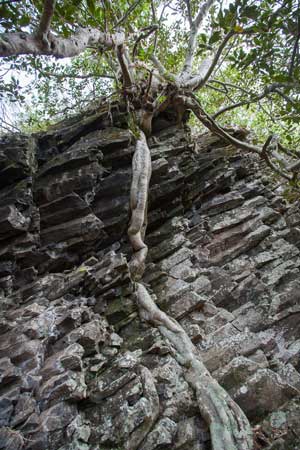 Basalt and fig, Capertee Gorge  (Ian Brown)
The semi-hexagonal columns often seen in basalt lava result from cooling and cracking, rather like cracks in drying mud.
The size of the columns indicates the speed of cooling – the smaller the hexagons, the quicker the rock cooled.
Well-known diatremes in the east include:

While in the north in Wollemi National Park they have names like Davis Hole and Casbah Crater.

Most of the basalt lava (much younger than the diatremes) has been eroded away, but remnants survive on some of the higher tops such as:

These were probably low points when the lava erupted and naturally flowed along the valleys.

Remains of river gravels can be found under some of these basalt 'caps'. The basalts cooled into semi-hexagonal columns, which can be seen in outcrops such as a cutting near Mount Bell on Bells Line of Road.

A few basalt exposures occur in some deep valleys (e.g. Capertee and Wolgan gorges), and these are probably eruptive lava vents rather than explosive diatremes.