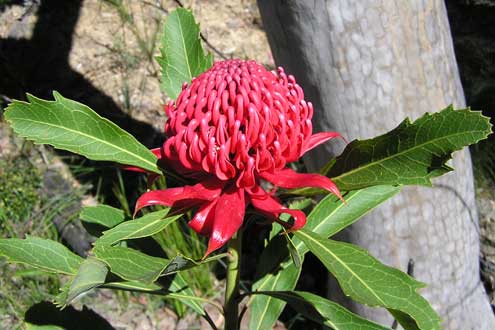 There's 2,362 species* of native plants in the eight reserves that make up the one million hectare Greater Blue Mountains World Heritage Area (GBMWHA).
[* - species in this case includes subspecies and varieties.] 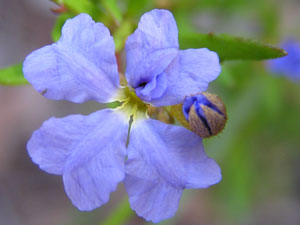 Blue Dampiera  (Dampiera stricta)
Photo: Alan Page
These species are spread across 150 flora families and 619 genera - with 12 families, between them, containing over 60% of the species. They are showcased here.

108 of these species are threatened species with a further 292 protected. They are detailed here.

In addition, there's over 400 exotic or introduced species (weeds) and they're detailed here.

Here's the list of the GBMWHA native flora species.

More details of the analysis can be found at the foot of this webpage.

The Greater Blue Mountains World Heritage Area (GBMWHA) was inscribed on the World Heritage list due to its biodiversity - especially its number of Eucalypt species.

The Nomination for World Heritage quoted "over 1,500 flora species". It now stands at 2,362 - and is increasing.

You will find more information about the GBMWHA here.

The landscape, geology, microclimates and fire histories of the Greater Blue Mountains are very diverse, and give rise to a rich ecological diversity. This is well expressed by the variety of vegetation in the World Heritage Area, which contains:

You will find more information about the GBMWHA's vegetation here. 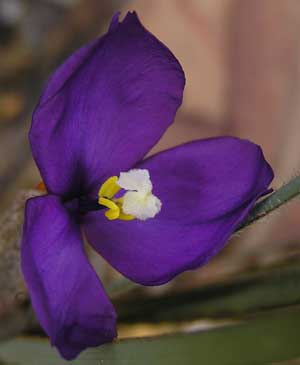 Dwarf Purple Flag  (Patersonia sericea var. longifolia)
Photo: Alan Page
The list produced in 2016, only went to the species level - whereas this list goes to the subspecies/variety/form level.

The list is by no means definitive, and will change as -

Note: Where subspecies are included, the "parent" species is omitted; whereas when a variety is included, its parent is retained.

Some PlantNet records go back almost 200 years, and these species may no longer be present.

It should be also remembered that 65% of the million hectares of the GBMWHA is declared wilderness and is difficult to access.

In addition, BioNet makes the following qualification - "The data are only indicative and cannot be considered a comprehensive inventory, and may contain errors and omissions."

However, the list provide a solid baseline of the GBMWHA native flora - its diversity, breadth and splendour.