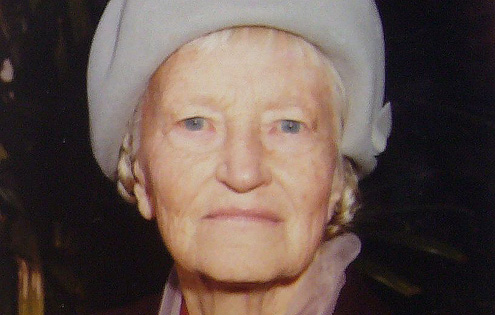 The photo above was taken at her investiture with an OAM in 1985 ‘for services to conservation and botany in the Blue Mountains’. 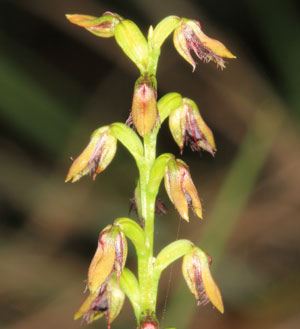 Here is a summary: 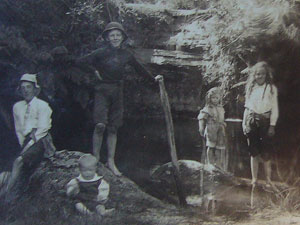 Isobel Bowden (2nd from right) with her four siblings, 1912, in the pools next to Ye Humpy
Where did this interest in the mountains environment come from?

From growing up in the Blue Mountains with four siblings in what must have seemed to the children an idyllic childhood.

Isobel had spent much of her young years in the bush at a bush hut in Wilson’s Glen in Woodford her mother had built around 1911 called Ye Humpy. 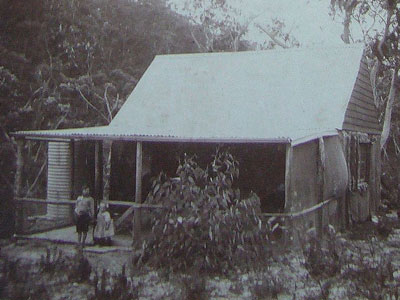 Ye Humpy - older brother Tom & Isobel, 1911
The children grew up ‘running wild’, a friend of Isobel’s said, learning a great deal about it and loving the native fauna and flora. Blissfully ignorant of the family’s heavy debts, the children were provided with a very happy childhood.

While Isobel must have benefitted greatly later from her school and teachers’ college in botany and art, she was largely ‘self-taught’, she says, but with strong links to an Australia-wide botanical artistic community.

It was towards the end of World War II, particularly during the time she lived at Woodford Academy, that she began her prolific painting, strongly based on her careful observation of nature as this 1944 poem indicates:

Did you see the orchids growing
On the green?
Where the happy creek is flowing
Swift and clean.
Just like little beads of coral
They appear
And they hide amongst the sorrel
In their fear
For the wicked brownies kiss them
As they pass
And they look so pink! – don’t miss them
In the grass. 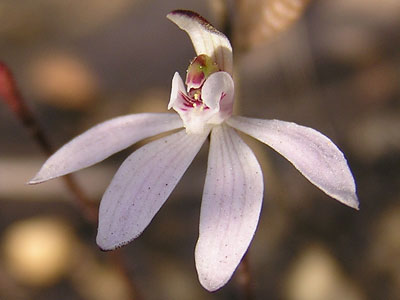 Isobel said, We lack understanding of what is happening on the ground. You’ve got to have the eye of an insect to see it like a forest. 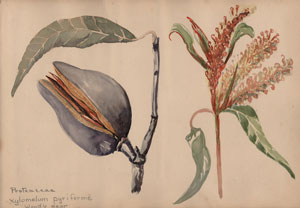 Woody Pear - Xylomelum pyriforme  (Isobel Bowden)
Her room at the Academy was wall-to-wall with paintings she had done of the natural world around her.

The earliest water colours for which we have records are the 44 pages of a booklet, painted from 1945 to 1948, of what she called ‘Woodford Trees’ of which the Woody Pear is one example.

Artist Brian Kirkby comments on this water colour: You can see Isobel’s passion for documenting intricate botanical detail. Structurally it's very robust with a strong sense of design. Note also the sensitive use of tone.

In Isobel’s Nature Notes 1, she records the following in 1946: 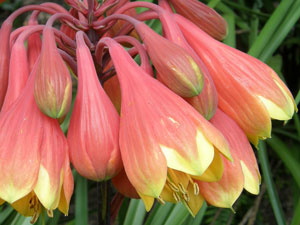 Mountain Christmas Bell - Blandfordia cunninghamii  (Alan Page)
... a bat flew into my room last night …and I was so anxious to help it out that I forgot how anxious I was to scrutinise it.

And Christmas bells I wondered if I should cut them … why should I be the one to cut them? Perhaps people would leave them and they would be a pleasure… When next I passed they were gone … they were dragged out … I suppose I have to thank my home training … for being different … the only hope is to train children … Blow Botany lessons and plant Biology – teach them to love their national heritage and understand what its real value is. I don’t think any place in the earth has more lovely flowers than our own lovely large Christmas bells.

Isobel appears to have taken her own advice and decided that, as she had to get a job because she had no money, she would put her principles into practice of getting children she was teaching out into the natural world.

The Principal of Cromehurst School Lindfield employed her to teach transition in May 1946.

In 1952, she purchased seven acres of land at Woodford which she planted with fire-retardant plants that she felt would preserve the fauna and flora from bushfire, a strong commitment to the environment that absorbed much of her attention and was well ahead of her time.

By 1953, she was becoming a public figure, communicating with Myles Dunphy, the father of the environmental movement in Australia, and speaking on 2FC (now Radio National) about Woodford orchids.

But it was after 1961, when she had a serious breakdown, during which she destroyed 4,000 of her paintings, that she had her most productive period.

She taught at Blue Mountains Grammar from 1956 until 1963. In that year, she completed her Pioneer Way map, having sold 100 copies by June.

She published a short history, ‘Linden to Woodford’ in 1963. 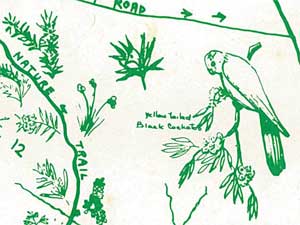 But in the midst of all this activity, Isobel was under some stress because of a sense of insecurity. In October 1963 she wrote:

As the years pass, most people’s lives follow an ordered way. But the last few years have certainly been filled with disruption and anxiety as the weeks have gone by without any settled work to provide even the necessities of daily life.

In January of this year I approached Miss McManamey to see if she would open the place for inspection and I would run a tea room with items of historic and natural history interest. She was most excited and thrilled at the prospect but after I moved in she drew right out. 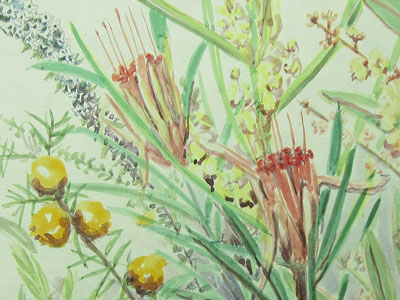 Floral Diary 1961  (Isobel Bowden)
It was her floral diary output of paintings at this time that was extraordinary.

She had almost immediately regretted destroying her Academy and other watercolour paintings in 1961 and, attempting to replace what she had destroyed, she produced the first book from August 1961 to January 1963 of such paintings, of which this image is an example.

20 other books to replace those lost followed that covered the period from then until the end of 1981, when her eyesight began to fade.

In Book No 5, for example, covering 1 May 1967 to 15 March 1968, there are 49 pages of multiple images, covering plants from places as far afield as Mt Hay, Tarana, Bell, Mt Wilson, Blue Gum Forest and Murray Park, with a fair number from such local sites as Lawson, Murphy’s Glen, Woodford Dam, Linden and Woodford Railway, the last being a favourite haunt, according to Jill Dark, in the days before the upgrade of the highway. 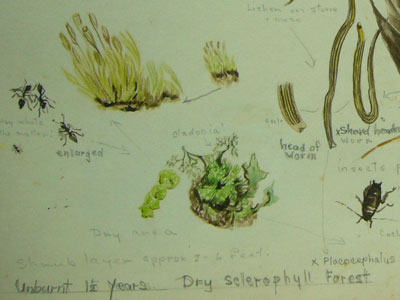 The Earth 1981  (Isobel Bowden)
I did not count the number of images, but I’d estimate there were some 49 pages multiplied by 20 books, roughly 1000 pages, with anything from 3 to a dozen images per page.

There is a book of Isobel’s watercolours in the Mitchell Library entitled ‘The Earth’, a sample of which is on display here.

In this case, Isobel is examining the effects of burning on the landscape. I held my breath, trying not to touch the earth, she said.

In her later years, Isobel was unflagging in her commitment to conservation causes.

Around 1978, my then mid-teenage son Matt went some dozen times to the Wentworth Falls Conservation Hut to assist as a volunteer. On one such occasion, accompanying a family friend and long-time president of the conservation society Fred Astle, he called into Isobel’s home on the way to the hut. My son remembers Isobel not only as an engaging person on that occasion, but imbued with engaging ideas which she was deeply passionate about.

Isobel’s nephew Ian remembers how on one occasion in 1978 a group of Vietnamese refugees were brought up the mountains from Sydney by bus and stopped at her place. In conversation, Isobel told them not to settle in the mountains because there was already too much settlement, creating pollution. She was ever passionate in protection of mountains vegetation!  Fortunately the visitors were unlikely to quite understand what she was saying to them! 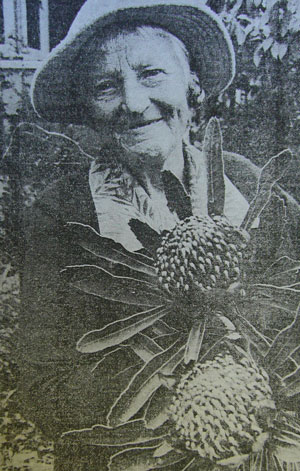 Isobel Bowden & Waratahs, 1981
Conservationist Jill Dark accompanied Isobel on her collecting walks in the early 1980s, transporting her on one occasion to Bell in spring to see waratahs, and occasionally calling on her at home when Isobel was always curious about what Jill had found and where. Age did not dim her enthusiasm! And she had her many friends around her in the 1970s and early 1980s.

In response to congratulations from the Blue Mountains City Council on her award of an OAM in 1985 she wrote what was in effect this farewell speech (she had had terminal cancer for four years at this stage):

Both Australia wide and on our Blue Mountains aspects of conservation especially wild life conservation are of paramount importance.

We must grasp the fact that the problem is not one of withstanding further depredations but of setting our eyes on winning back what in the immediate past has been ignored or lost.

We need an ongoing sense of achievement in making this country what it can become for the future and I do wish you all the very best in being part of an Australia wide awakening.

By the end of her life, she had contributed 371 plant specimens to herbaria throughout NSW, some 200 to the Sydney Botanical Gardens. 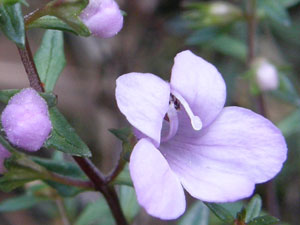 Euphrasia bowdeniae  (Alan Page)
Permanent memorials to her are: 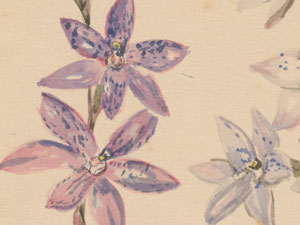 Woodford Orchids  (Isobel Bowden)
In this one, the fine detail achieves photographic representation of these delicate Woodford orchids through a sensitive use of tone, line and colour.

And, to conclude, three excellent reproductions of Isobel’s work – 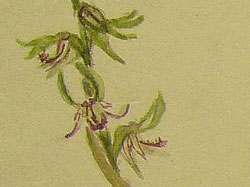 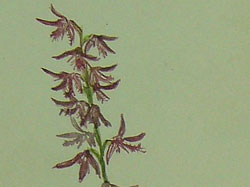 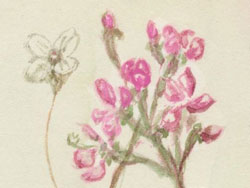