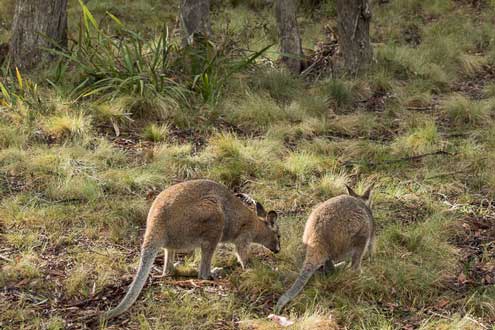 Relative to the widespread shrubby forests on sandstone, the grassy woodlands are fringe communities in the Greater Blue Mountains.

They occupy just over 2% of the landscape, occurring at both low and high altitudes on deeper soils of moderate to high fertility derived from shales and granites.

They occupy the rain shadows of both the coast and ranges.

They have a diverse understorey of grasses and herbs, few shrubs, and their trees are often well-spaced.

Canopy species include various box, red gum and ironbark eucalypts and, at high altitudes, species from the ash group of eucalypts.

There are five classes of grassy woodland in the Greater Blue Mountains, each with quite limited occurrence. 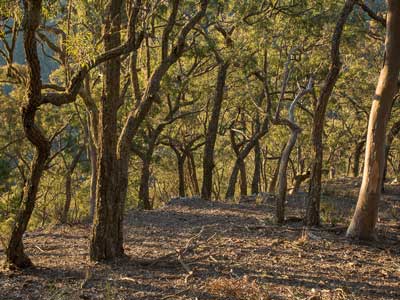 These locations are in the coastal rain shadow. 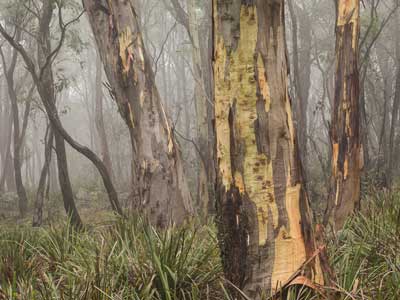 These woodlands are somewhat shorter than the coastal valley grassy woodlands.

The ground cover is dominated by the Large Tussock Grass (Poa sieberiana).

Tableland Clay Grassy Woodlands also occur at high altitudes; however, they are restricted to the richer soils derived from basalt.

In the Greater Blue Mountains, these woodlands are highly restricted, but they are more widespread elsewhere in NSW, occurring extensively on the Northern and Southern Tablelands.

Examples can be found in the vicinity of Mount Werong and Wombeyan Caves.

The former grow on loamy soils in the rain shadow of the escarpment in the south-western part of the Greater Blue Mountains, south of Oberon.

In the Greater Blue Mountains, the most prominent examples are the upper reaches of the Abercrombie River where the canopy species are mainly Broad-leaved Peppermint (Eucalyptus dives) and Apple Box (Eucalyptus bridgesiana).

The latter occur in similar rain shadows north of Lithgow, including in the valleys of the Wolgan and Capertee Rivers and across northern Wollemi, where White Box (Eucalyptus albens) and Yellow Box (Eucalyptus melliodora) become prominent.

Both these classes of grassy woodland are at the eastern-most limit of their range in the Greater Blue Mountains, and are more common west of the ranges. 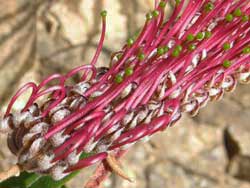 Grevillea aspleniifolia
photo by: Alan Page
Its toothbrush-like flower and jagged leaves identifies it. This plant was found in the Kedumba Valley. 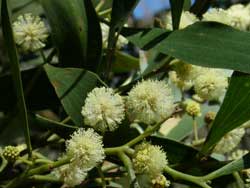 Blackwood   (Acacia melanoxylon)
photo by: Alan Page
A medium size tree - growing to 30 metres, it is identified by the 3-5 or more longitudinal veins on its leaves. 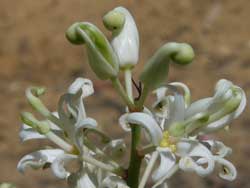 Crinkle Bush   (Lomatia silaifolia)
photo by: Alan Page
This small shrub is recognised through the year by its unique leaves, and then in summer by its spikes of white flowers. 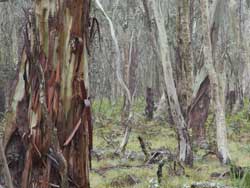 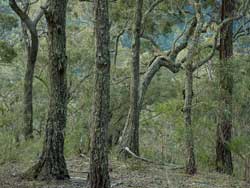 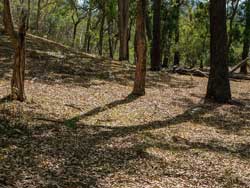 Coastal Valley Woodlands, Jenolan River
photo by: Ian Brown
This is a tiny but delightful example of a vegetation class that is mostly confined to low valleys in the east of the Blue Mountains.
Here on a small alluvial flat in the rainshadowed depths of the Jenolan River gorge, Rough-barked Apples (Angophora floribunda) dominate over a marsupial-grazed ‘lawn’ and summer leaf-fall.
﻿
© 2021  Blue Mountains nature
an Alan Page - Ian Brown initiative