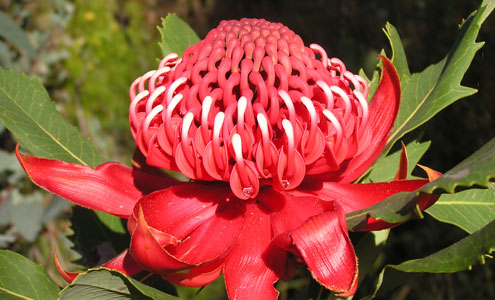 "The Waratah is one of our best known plants and is the floral emblem of the State of New South Wales. Its botanical name is most appropriate as it means 'most beautiful plant seen from afar'." (Native Plants of the Sydney District, Fairley and Moore.)

We all love the Waratah, Telopea speciosissima. It is such a thrill to come across the magnificent red flower in the bush.

Waratahs were once very common in and around the mountain towns. Can you imagine what a wonderful display they would have made in the springtime? 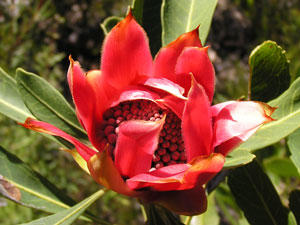 Waratah   (Dianne Page)
“Waratah plants were common in October and November and the bush was gay with them, but they were dug up by the grubber who thinks that to clear land it is necessary to only leave sand and rock; or the blossoms picked till the poor plant, which can only throw out new blooms through the heart of the old ones, gives up the hopeless struggle and dies.” (Blue Mountains Echo,11.5. 1910)

“Two thousand waratah blooms were forwarded to Melbourne for use as decorations at the ball given by the Governor-General during Cup week, all gathered within a few miles of Blackheath station. ….. Waratahs are plentiful this year about the locality, and large bunches were gathered every day by visitors to this mountain resort.” (Lithgow Mercury 6.11.1912)

By October 1924 there had been an ordinance put in place to protect the waratah, “making it an offence for which severe penalties are provided for the plucking of waratahs growing on lands owned by the Crown or by any statutory or public body, or the removal of plants therefrom, during the period 1st September to 30th November in each year” (T N Ayling, Town Clerk, Katoomba, 10.10.1924) 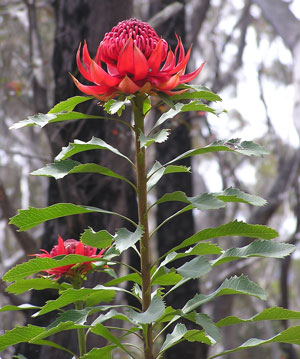 “Every day witnesses hosts of travellers embarking on the trains laded with the rich ruddy bloom of the State’s most distinctive flower. It is carried into accommodation houses by the armful. It stands in vases in public refreshments rooms. It adorns the mantels of private residences. It is ravished wholesale from remote gullies by motorists.

On every hand we watch it being carted away, yet an alleged stringent enactment prohibits it from being plucked between September 1 and November 31. ... The protective (?) ordinance is so faultily worded, that it almost is essential to catch the ravisher in the act to secure a conviction.

Unless he or she deliberately or thoughtlessly chooses to incriminate himself or herself, the precious flower may be taken with impunity …”

These days the Waratah is protected in our national parks and public reserves. There are places where they can be seen in abundance. However there would be few who can remember that there were multitudes of waratahs easily found “within a few miles of Blackheath station”, or any other mountain town.

The article above first appeared in the January, 2003 edition of Hut News and in November 2010 on the Greater Blue Mountains World Heritage Experience website.
﻿
© 2021  Blue Mountains nature
an Alan Page - Ian Brown initiative