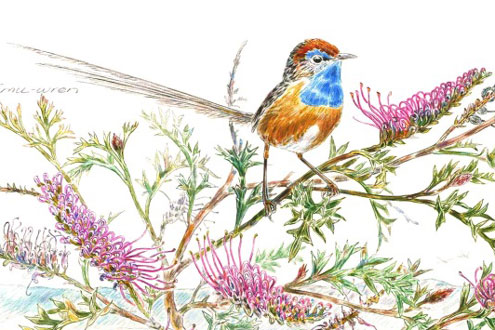 The unique hanging swamps, that cling to seepage points in the Blue Mountains bush, have their own surprises. 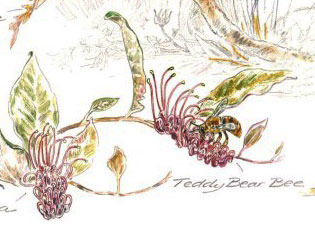 Look to the edges of the swamp in surrounding drier sandstone bushland and you can also find its cousin Grevillea laurifolia. Spidery flowers, again, but deep red this time, with ovate leaves and a ground-hugging, prostrate growth habit.

And where you get these 2 species growing close by each other, you may also find an unusual pairing: Grevillea x gaudichaudii, a natural hybrid that combines the prostrate form of G. laurifolia with the pink flowers of G. acanthifolia and leaves somewhere between the two. (G. x gaudichaudii, by the way, also makes a great garden plant.) 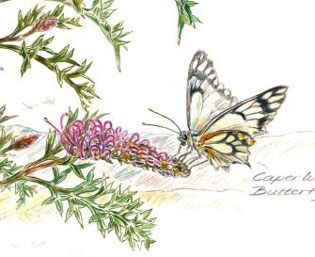 Nectar rewards from grevilleas are used by more wide-ranging foragers.

I’ve shown, here, Caper White butterfly - a western species that sometimes moves through the mountains in very large numbers, and some of our many native bee species, including the attractively furry Teddy Bear Bee.

Fiona grew up in Mt Wilson amidst the wilderness of the Greater Blue Mountains. It was there that she began learning about the birds, animals and plants of the wild places that surrounded her. She has lived in and explored the upper Blue Mountains area ever since.

She has been painting Australian birds for over forty years now: studying their form, habits and habitat, primarily on her numerous field trips throughout Australia but also in zoos, aviaries, museums and literature.