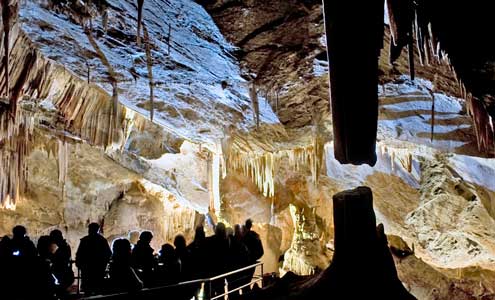 Underground, you can enjoy cave tours and see the intricate and stunning formations, dazzling crystals and colours, reflections in crystal-clear, blue-green underground rivers and be safely guided through the maze of passageways and chambers.

There are themed tours for children or those interested in history or paranormal experiences and those who want to explore the off-track areas of the caves. Or you may choose to be challenged by the excitement of adventure caves. 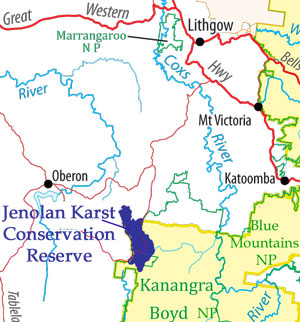 Jenolan Karst Conservation Reserve location   (based on a map by Karen McLaughlin)
Above ground are six different walking tracks to follow to enjoy the scenery, flora and fauna, Aboriginal and European culture and history.

Jenolan is one of the very few areas in the southern Blue Mountains where the threatened Brush-tailed Rock-wallaby survives.

Other locally observed inhabitants include the Platypus, Tiger Quolls, micro bats, possums, Wombats, Echidnas, Red-neck Wallabies, Water Dragons, Lyre-birds, rosellas and a range of other birds, including the Sooty Owl which is known to have nested in the caves for at least 18,000 years!

Nearby is Kanangra-Boyd National Park with bushwalks, camping and incredible scenery. 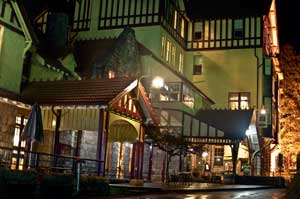 Caves House at night
(Jenolan Caves Reserve Trust)
Accommodation is available in the historic and romantic Caves House with its comfortable guest rooms, ballroom, Grand Dining Room, convivial bar and bistro leading to the popular terrace overlooking the entrance to the Grand Arch.

In addition there is the Mountain Lodge with motel-style accommodation, The Gatehouse with backpacker accommodation (ideal for school groups) and individual self-contained bush cabins and cottages. 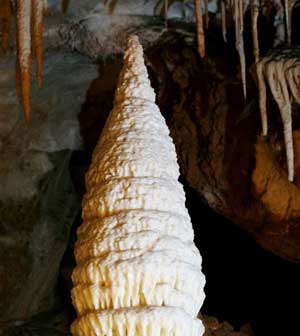 There are thousands of stalagmites at Jenolan but The Minaret is one of the most striking
(Jenolan Caves Reserve Trust)
The Jenolan karst (a landscape formed in soluble rocks like limestone) is extremely cavernous compared to other karst areas, perhaps due to its great age and the time available for the limestone to dissolve and form cavities. The Jenolan cave system has more than 40km of multi-level passages with over 350 named caves.

When water, rich in dissolved limestone (calcium carbonate) percolates down through cracks in the limestone and reaches the open area of the caves, it loses some of the carbon dioxide and therefore has to re-deposit the calcium carbonate as calcite crystal and forms the myriad of shapes, sizes and colours of the wonderful formations within the caves.

It has taken hundreds, thousands and millions of years to develop the range of beautiful formations that visitors see today.

Scientists have taken samples of clays found in several of the caves at Jenolan and analysed and dated them and have found them to be in excess of 300 million years old – which is long before the separation of Australia from Antarctica and India and before the uplift of the Blue Mountains themselves! Some geologists might dispute these findings but it is why the Jenolan Caves claim to be the ‘oldest open caves anywhere in the world’. It is amazing to think that the caves have been here, not just for hundreds or thousands of years but for hundreds of millions of years! And today there are over 350 different, named caves in the Jenolan Karst Conservation Reserve. 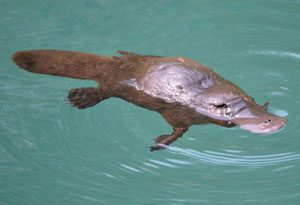 Platypus at Jenolan Caves  (Sue Nicol)
The 3085 hectare reserve is the oldest protected area within the Greater Blue Mountains World Heritage Area and one of the oldest surviving reserves for conservation in NSW.

It was first protected (‘reserved from sale’) in 1866, one year after Wombeyan Caves and is bordered by the Great Dividing Range on the west and Kanangra-Boyd National Park on the east and south.

Over its history, Jenolan has been managed by a number of government agencies, including tourism and lands. At present (2019) most of the reserve is managed by the National Parks and Wildlife Service, while the tourist caves precinct is managed by the administrator of the Jenolan Caves Reserve Trust.

As well as limestone karst, it also contains sediments of the Lachlan Orogeny. Other small karst areas of similar age occur within the nearby national parks at Colong, Church Creek and Tuglow and at Wombeyan Karst Conservation Reserve.


Exhibition Chamber
click the image to access a scrollable panorama
(panorama courtesy of Panedia)
There are twelve different caves that are shown to the public; three of them are adventure caves where you are supplied with overalls, a hard hat, caving light and led by qualified and experienced guides to abseil or climb down into the depths of the unlit and undeveloped caves to explore as the early explorers and visitors did a century or more ago.

The show caves do not require such effort or commitment. Tours take between one and two hours, vary in difficulty, number of steps, size of group and cost. There are also specially themed tours for children or adults about the legends, mysteries and ghosts of Jenolan or that take you off the usual tracks in the show caves.

Visit the website for more information and book online or at the ticket office at Jenolan. 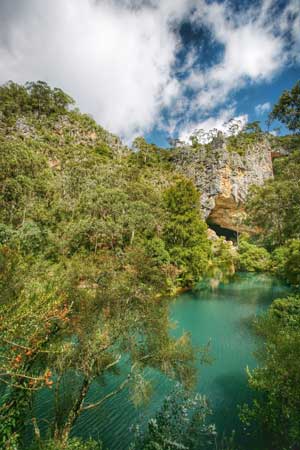 Jenolan Caves lie on the western edge of the Greater Blue Mountains, 29 km south-east of Oberon and 74 km south-west of Katoomba by road.

Most visitors travel by car, but coach and guided tour transport is also available.

Situated at the base of a narrow, steep-sided valley are the placid Blue Lake and the majestic Grand Arch – a natural tunnel through which the main road leads to caves and the historic and romantic Caves House Hotel. 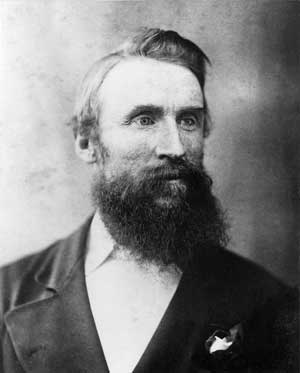 The first recorded visit by a European was as early as 1838. The story goes that a pastoralist by the name of James Whalan was living near Oberon and losing cattle and horses. By following the tracks of their animals, he came across the stock penned up in what we now call McKeowns Valley, named after James McKeown, an ex-convict, and probably the first non-Aboriginal to know of the caves.

The Whalans reported finding the caves and straightaway brought family and friends down to see the three arches: now called the Devils Coach House, the Grand Arch and Carlotta Arch.

It was not until 10 years later that the first ‘dark’ cave was explored – by candlelight over thirty years! Progressively the other caves were discovered, explored and visited – still by candlelight!

In 1866 the caves came under direct government control and the first guide/keeper of the caves (Jeremiah Wilson) was appointed. 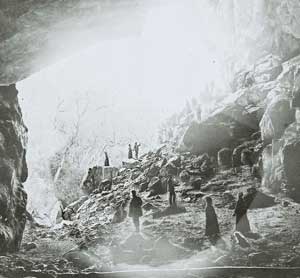 Tourism continued but accommodation was initially limited to camping in the Grand Arch – ladies on one side of the stream and gentlemen on the other!

In 1880 a simple accommodation house was constructed.

After damage by fire, it was replaced in 1898 by the beginnings of the present Caves House Hotel – a magnificent ‘Arts and Crafts’ style, grand country hotel with ballroom, grand dining room and all the comforts you would expect. 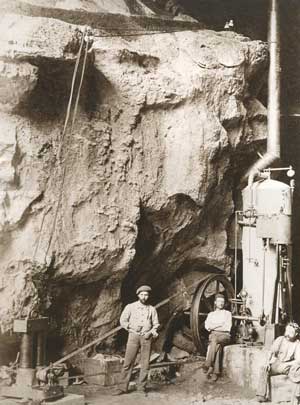 In 1880, the Margarita Chamber was the very first cave in the world to be lit by electricity – and that was less than 12 months after Thomas Edison developed the first carbon filament lamp!

Permanent electric lighting was installed in 1887 – twenty years before Sydney had streetlights! The cave lights were initially powered by steam and then by hydropower in 1888.

Today, the caves are lit by a combination of state grid power, emergency generator and back-up hydropower. Jenolan’s lighting is the most advanced cave lighting system in the world. 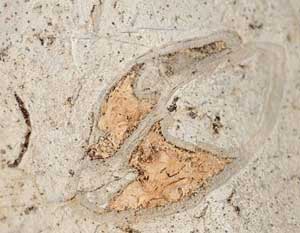 The sedimentary limestone at Jenolan Caves has been dated to 430 million years old and therefore is classed, in Australia, as ‘Silurian’. We do not expect to find any fossils of humans or dinosaurs and we haven’t even found any fossils of fish skeletons in the caves as animals with backbones were still developing when the limestone was laid down under an ancient warm shallow sea. It consisted of layers upon layers of shellfish (such as (Brachiapods and Crinoids), Corals, Stromataporoids and fine grained calcium-rich lime mud and clays. The layers were then hardened into rock, lifted up, turned on their side and exposed to the elements.

Cracks in the limestone have allowed water to penetrate. Water, which passes through the earth’s atmosphere as rain, sleet or snow, picks up small amounts of Carbon-dioxide (CO2) and becomes a weak carbonic acid. When the acid water comes in contact with the limestone, it slowly dissolves the limestone and so cracks in the rocks eventually become caves, passages, arches, etc.

In some parts of the caves, it is obvious that geothermally heated water welled up from below through cracks and dissolved the limestone before receding and leaving typically vertical domed chambers with cupolas and ‘bell-holes’ where the warm underground water met the cold water from the ground’s surface. 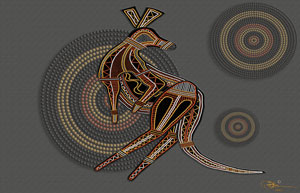 The local Aboriginal people referred to the caves as ‘Binoomea’ which means ‘dark places’.

They did not inhabit the dark caves at Jenolan but they understood the origin of the caves through one of their creation stories, which describes a titanic, landscape-forming struggle between Mirragan the Tiger Quoll and Gurungatch the Rainbow Serpent.

They also brought their sick people to sample the healing waters of the two underground rivers.

The caves sit within the lands of the Gundungurra Nation.