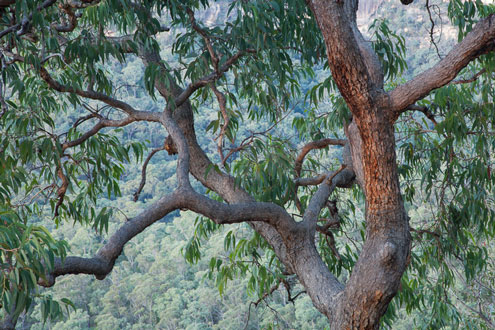 Gumtrees: are they the ecological essence of Australia? More than 700 species of Eucalyptus dominate the continent’s bushland like no other genus on any other continent – from Tasmania to the high alps, the deserts and tropical savannahs. A few have even made it into New Guinea, Indonesia and as far as the Philippines. 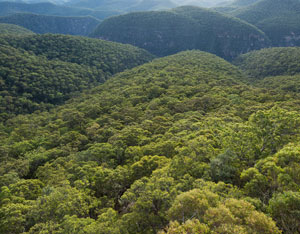 The mighty pillars of Eucalyptus regnans (Mountain Ash) in Victoria and Tasmania are the largest flowering plants on Earth, while the humblest eucalypt is the alpine shrub E. vernicosa (Varnished Gum), found only in Tasmania. River Red Gum (E. camaldulensis) grows across much of the mainland to be the most widespread.

Most of the Greater Blue Mountains World Heritage Area (GBMWHA) (about 93 per cent all up) is covered by a vast mantle of eucalypt forests, woodlands and mallee shrublands, with much smaller areas of rainforests, heaths, wetlands and exposed rock. As might be expected from the diversity of the landscape, altitude, geology, soils, climate and fire history, the diversity of eucalypts is also very high. 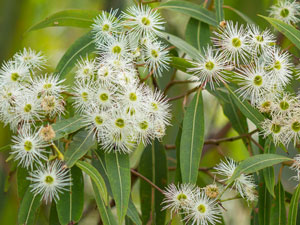 Smooth-barked Apple  (Angophora costata subsp. costata)
(Ian Brown)
The ‘eucalypt’ group includes species of the Eucalyptus genus, plus the closely related Corymbia (bloodwoods) and Angophora genera, all in the myrtle family (Myrtaceae) - around 900 species in total.

The latest tally (by Alan Page, see: The Eucalypts in the GBMWHA) puts the number of eucalypt species found in the WHA at 99 – one of the greatest concentrations of eucalypt diversity in Australia, or anywhere on Earth, and hence a probable centre of evolution for the group.

This total doesn’t include another 11 species that potentially occur in the WHA but have not yet been recorded within the boundaries or are otherwise uncertain.

Overall, there are at least 110 eucalypt species in the Greater Blue Mountains landscape

About half of the species are widespread in the region, with three species endemic to the WHA (and therefore well protected) and six others listed as threatened in NSW. 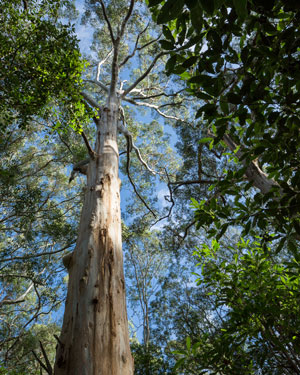 Climatically they range from sub-alpine species like Snow Gums (E. pauciflora) to some of the Ironbarks and Red Gums that favour semi-arid conditions.

This variety of trees is an aesthetic treasure trove, with many species of great stature or character and some with spectacular bark colours (especially in the rain) and impressive flowerings.

Ecologically the eucalypts provide homes and food for a myriad of birds, reptiles, mammals, frogs and invertebrates.

The diversity of eucalypt-dominated ecosystems and other hard-leaved vegetation is a key reason the GBM was deemed worthy of world heritage listing: the region is one of the best examples of quintessential Australian ‘bush’ and ecosystems.

Eucalypts: 10 things you may not know about an iconic Australian   ABC Science By Genelle Weule
﻿