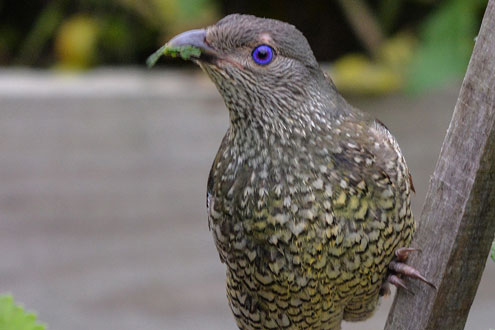 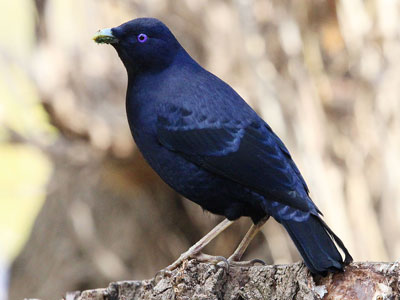 Some birds stay put all year but others wander about, possibly with a general movement of birds from the lower to upper Mountains over winter. Flocks of 30 or more bowerbirds have been reported but lately they seem to be getting about in much lower numbers. In bushland areas, bowerbirds live mainly in rainforest and wet sclerophyll forest and less often in drier forests. 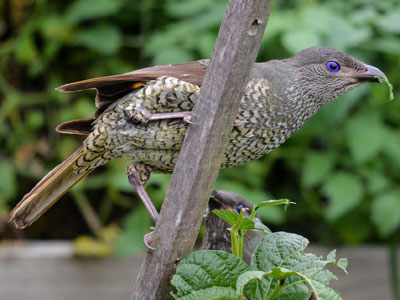 female Satin Bowerbird  (Duncan Coles)
Around towns, they are very much at home in gardens. Bowerbirds love beans, especially their leaves, bok choy leaves, mulberries, grapes and whatever other fruit is going.

In the bush they feed on soft fruits such as Lilly Pilly, Native Cherry and Native Grape, some harder seeds, such as those of the Cheese Tree, and also invertebrates. They must be quite efficient spreaders of seed.

Between 1965 and 1968, Reta Vellenga, together with husband Sydney, colour banded 600 birds in their garden in Coniston Road, Leura (near Everglades). This allowed Reta to recognize each banded bird as an individual. “No. 85”, a resident adult male, became a particular favourite and integral part of their studies. 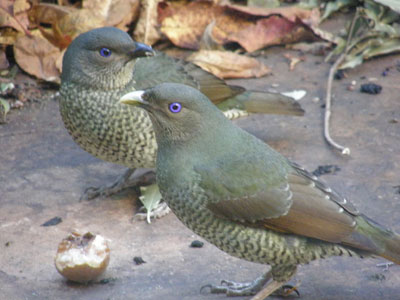 female and juvenile male Satin Bowerbirds  (Alan Page)
Reta’s monumental observations (which Reta described as an “amateur project” despite eventually banding 940 bowerbirds) have revealed much of what we now know about the bowerbird, particularly their breeding behaviour.

It is the males who, in winter and spring, build the stick bowers which they then decorate with mostly blue-coloured objects including Crimson Rosella feathers and, around town, blue clothes pegs, straws, biro tops and milk bottle tops.

The inside of the bower is continually painted with a mixture of saliva and plant material. Dominant males build bowers to attract the females and to demonstrate that they are good prospective father material. 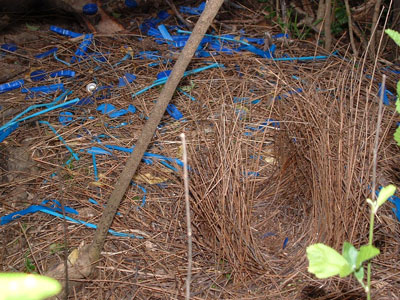 the bower  Peter Smith)
Reta concluded that the bowerbirds are best described as “promiscuous” birds.

The dominant males exclude other mature males from their bowers but seem to show some tolerance to immature males (green birds with light coloured bills, the bill of females is always dark) who build rudimentary bowers nearby but do not mate.

Younger males periodically raid the dominant male’s bower, sometimes trashing it and leaving a pile of sticks which the older male promptly rebuilds. What the older males really think of the younger males is difficult to fathom. Mature males also raid each other’s bowers, flattening the sticks and pinching ornaments. 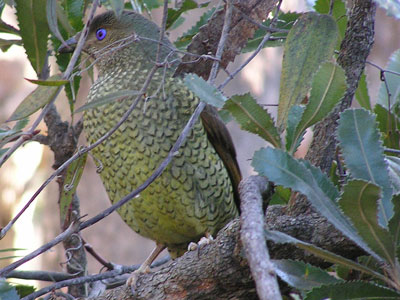 female Satin Bowerbird  (Alan Page)
While the males may be frantically busy at the bowers, it is ultimately the females who build the nests (a flimsy cup of twigs built in an upright fork of a tree or shrub) and rear the young.

The call of the bowerbird has been described as a strong “downward whistle”, maybe just best to listen to the birds to learn the call. They are also quite good mimics of other birds’ calls.

We pay tribute to Reta and Sydney Vellenga, who had the foresight to leave us with detailed accounts of their wonderful studies in Leura during the 1960s.