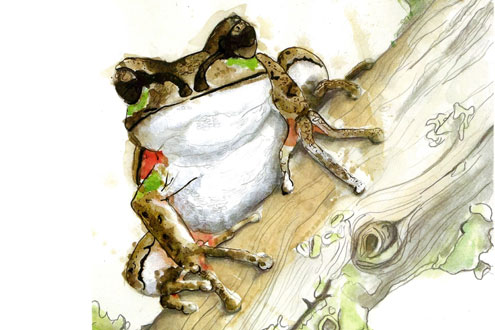 The Greater Blue Mountains World Heritage Area comprises eight reserves: Blue Mountains, Gardens of Stone, Kanangra-Boyd, Nattai, Thirlmere Lakes, Wollemi and Yengo National Parks, and Jenolan Karst Conservation Reserve. The area was inscribed on the World Heritage List in 2000 because its natural values, including the diversity of its fauna, were considered to be outstanding at international level. 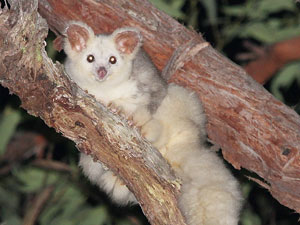 Greater Glider  (Peter Smith)
In 1998, when the nomination of the Greater Blue Mountains Area for inscription on the World Heritage List was prepared for the Australian Government, it was well known that the area provided habitat for a wide variety of mammals, birds, reptiles and frogs but the details were sketchy.

The nomination indicated that about 400 native terrestrial vertebrate fauna species had been recorded in the area, including 52 mammal, 265 bird, 63 reptile and more than 30 frog species.

However, these included species recorded in the vicinity but not confirmed to occur within the World Heritage Area. 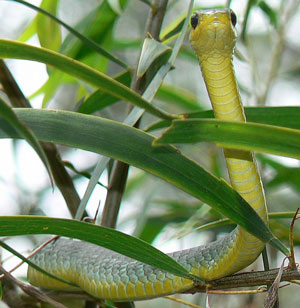 Green Tree Snake  (Peter Smith)
We have been residents of the Blue Mountains, and have observed and kept records of its fauna, for over 40 years. As ecological consultants, we have carried out many fauna surveys in the area.

In 1990, we published a book on the local fauna (J. Smith and P. Smith, 1990, Fauna of the Blue Mountains, Kangaroo Press, Kenthurst) and in 2019, from our own records and many other sources, we published a more comprehensive book on the fauna of the World Heritage Area (J. Smith, P. Smith and K. Smith, 2019, Native Fauna of the Greater Blue Mountains World Heritage Area, P & J Smith Ecological Consultants, Blaxland).

Our objective in the latter book was to document the native mammals, birds, reptiles and frogs of the World Heritage Area, with details of the distribution, abundance, habitat and conservation significance of each species. The book was intended to celebrate the outstanding diversity of native fauna in the area, to promote greater appreciation of this fauna, and to provide benchmark information that would be of value for the current and future management of the World Heritage Area. 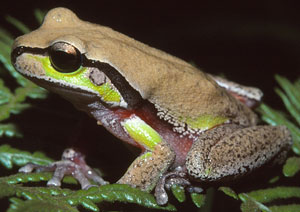 Blue Mountains Tree Frog  (Peter Smith)
Our book listed 68 mammals, 254 birds, 74 reptiles and 36 frogs that we considered to have been reliably recorded within the Greater Blue Mountains World Heritage Area since European settlement.

Sadly, nine mammal species now appear to be locally extinct, including one which is extinct at species level (White-footed Rabbit-rat Conilurus albipes), and one which is extinct at subspecies level (an unidentified bettong, either the Tasmanian Bettong Bettongia gaimardi gaimardi or the Brush-tailed Bettong Bettongia penicillata penicillata, both of which were recorded historically in the near vicinity of the WHA).

At least one frog species, the Green and Golden Bell Frog, last recorded in 1963, may also now be extinct in the World Heritage Area. 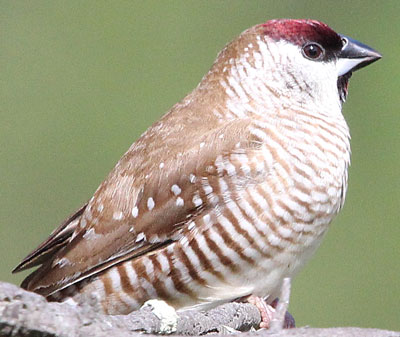 Plum-headed Finch  (Peter Smith)
While we were writing the book, the World Heritage Area was subject to a severe and prolonged drought accompanied by record-breaking and persistent high temperatures. These extreme conditions, which are a consequence of on-going rapid climate change, culminated in the spring and summer wildfires of 2019-20. The severity and extent of the fires were unprecedented and about 80% of the Greater Blue Mountains World Heritage Area was burnt. In early 2020, the wildfires were extinguished by deluges of rain which caused serious flooding and erosion in the World Heritage Area. The full impact on the fauna of these combined events is still to be determined, but it is clear that much more now needs to be done locally to promote the recovery and resilience of the native vegetation and fauna. In the face of the increasing impact of human-induced climate change on the World Heritage Area, it is also clear that local management initiatives will not succeed in the long term unless the issue of climate change is addressed much more seriously at state, national and global levels.

We are continuing to gather information on the Blue Mountains fauna. We intend to provide occasional updates to our book in the form of four annotated checklists (one each for the mammals, birds, reptiles and frogs), which will be made available on the Blue Mountains Nature and Researchgate websites. In this first update, there are two additions to the species list: one nomadic waterbird, the Plumed Whistling-Duck, was recorded within the WHA for the first time in the summer of 2017-18; and one mammal species, the Sugar Glider, has recently been split into three separate species, two of which occur in the WHA (Krefft’s Glider and Sugar Glider in a narrower sense). Thus, the native fauna species now known from the WHA include 69 mammals, 255 birds, 74 reptiles and 36 frogs. Seventy-seven of these (28 mammals, 38 birds, 4 reptiles and 7 frogs) are listed as threatened species under either national or state legislation (as of March 2021).

This first update represents the status of the fauna prior to the events of 2019-20 and does not take account of the impact of the drought, heatwaves, wildfires and floods. It is likely that the populations and ranges of many fauna species in the area have been reduced. Many fauna species have become much more threatened and some may have become locally extinct. The changes resulting from the upheavals in 2019-20 are yet to be elucidated and documented. As more information becomes available, we hope to do further updates describing those changes. Updating the checklists is an important and on-going process. If you have additional records or other information, your feedback would be very welcome.

Judy Smith and Peter Smith
May 2021 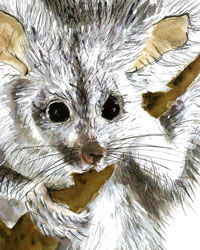 Our checklist includes 69 mammal species, of which 28 are threatened species.

The Australian mammal fauna has had an alarming history of decline and extinction since European settlement, and 9 of the mammal species recorded in the past in the World Heritage Area are now probably extinct there.

Protection and rehabilitation of the mammal fauna should be a management priority. 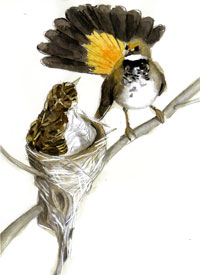 Our checklist includes 255 bird species, 4 of which are represented by 2 subspecies. 38 are threatened species.

The number of honeyeater species has increased to 29, but the checklist below has fewer species overall than the nomination.

Additional bird species have been recorded in adjacent farmland, wetlands and urban land, but not confirmed within the World Heritage Area itself. Such species were included in the nomination but are not included below. 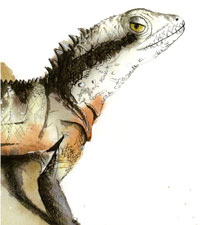 Our checklist includes 74 reptile species, 4 of which are threatened species, a distinct increase in the number of reptile species known to occur in the area since its nomination for the World Heritage List.

One species, the Blue Mountains Swamp Skink Eulamprus leuraensis, is restricted entirely to the World Heritage Area and adjacent lands. 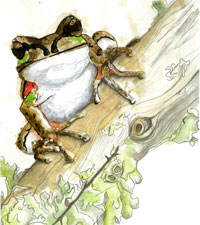 Our checklist includes 36 frog species, 1 of which is represented by 2 subspecies and 7 are threatened species.

At least 5 species have shown marked declines in the WHA in recent times. One factor in the decline is a global epidemic of a frog disease caused by a chytrid fungus (NSW Scientific Committee 2003).