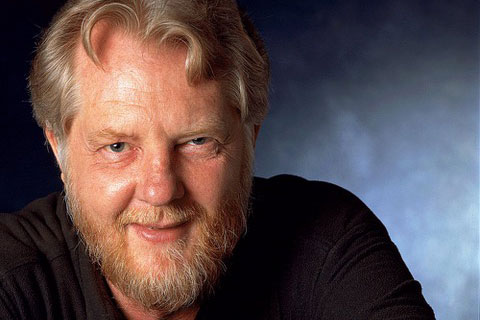 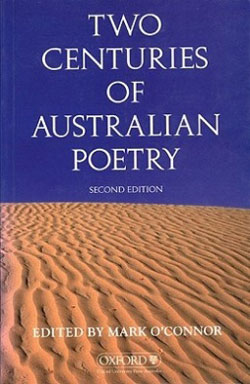 Two Centuries of Australian Poetry
Mark O’Connor was born in Melbourne in 1945, and graduated from Melbourne University in 1965. In 1988 he married Janet Eagleton.

He has published 15 books of verse, and won many prizes and awards. He was the Australian National University’s H C Coombs Fellow in 1999, and thereafter a Visiting Scholar in its Department of Archaeology and Natural History.

Mark has taught English at several universities and is the editor of Oxford University Press’s much re-printed Two Centuries of Australian Poetry.

Mark has also published prose books on environment and literary criticism and has been active on environmental issues. His poetry shows a special interest in the natural world and is distinguished by a detailed understanding of ecology and natural processes.

In 2003 his poems were included in the 5th edition of Oxford University Press’s anthology Seven Centuries of Poetry in English (edited by J. Leonard) and he was allocated more space than any poet under the age of Seamus Heaney (born 1939). 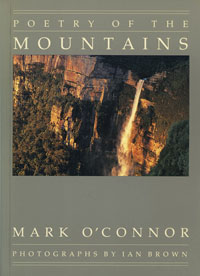 Poetry of the Mountains
Mark was Australia’s “Olympic poet” for the Sydney 2000 Games, with a fellowship from the Australia Council for the Arts to “report in verse on the Games”.

He has recently translated three plays by Shakespeare into contemporary English verse, for which he was awarded a doctorate in Shakespearean studies in 2016, with the highest commendation.

Mark’s book of poems about the Blue Mountains, titled Poetry of the Mountains, was written on a NSW Park Writers Fellowship, and published by Megalong Books in Leura in 1988.

His The Olive Tree: Collected Poems of Mark O’Connor, was published by Hale & Iremonger in 2000. 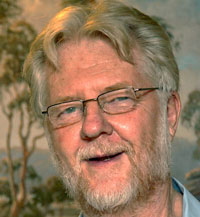 Mark O’Connor
Mark’s websites are:
MEANINGS
No myths. I would fear to insult
this delicate spiky particular land
with a human gloss.
A few of Mark's Blue Mountains poems 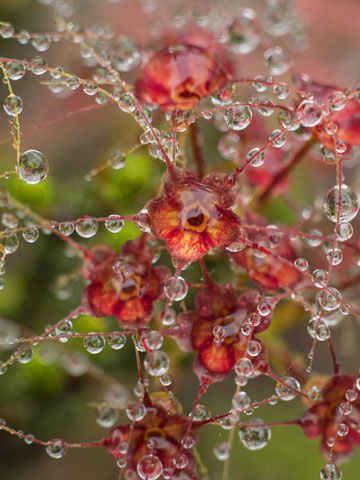 Common Fringe Myrtle (Calytrix tetragona)  (Ian Brown)
MIST
Wading through mists of the mountains' breath
the wet white air,
once thought to be spirits of the dead,
and adding our quota . . . . This chill
that pulls neat water from the air
- a touched leaf trickles,
rolls tears along the blade.

Then the brief downpour.
Gullies, like washing machines switched on,
churn soil downhill.
The bush path is a tunnel into mist,
where every spider's web is seen
flagged out with silver buoys.
The lorikeet shuffles dejected feathers,
sipping weak nectar. A huntsman
crosses the path, half crushed
beneath the rain's broom;
it walks on grass stalks,
a blind tightrope walker
feeling in eight directions.
Hairs on a banksia leaf
repel drops and store the dryness
(tomorrow there may be fire). 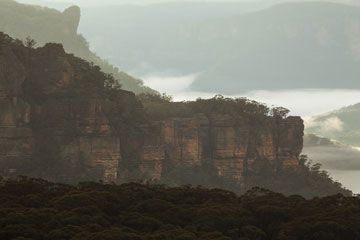 Headlands, Wolgan Valley  (Ian Brown)
MOVING MOUNTAINS
The peaks have many ways
to rise between or alongside others,
and in different light or weather.
We are all, they remind us, under the weather.

Round a bend, you surprise hunks of rock and cliff
jostling and manoeuvring, battleships in a bay.
Only parallax: but how swiftly those hillsides glide
as you hike, to a new formation, butting across
in each other's wake, finding gaps
in a squadron of lesser hills
where the main peak slices through,
leaving you somewhere precise, and precisely lost. 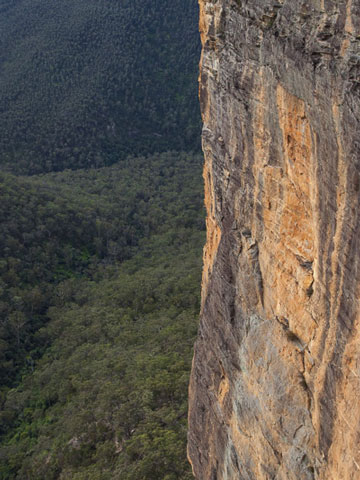 Cliffline, Grose Valley  (Ian Brown)
THE EDGE
The young falcon doubts her wing,
spirals up gingerly
from days in the nest
when her claws measured the air
for hold, till the heavy downed body
was out and flying

eyes flickering
at a field of mud dotted with blocks
of broken cliff, and a lizard's-tail of creek
sliding off through dark-green forest
with the ochre soup of an avalanche.

You tread the gravel of hold-fasts
as softly as on the whistling air.
A grasshopper leaps
and is past you,
falling so slowly
it will have a fresh appetite
when it lands.
The steel railing nudges
below your hips' fulcrum;
alone on the edge,
with a million years of monkey ancestors,
watching a thistledown blow up
a hundred metres in a minute.
And your heart cries that you could fly.